Patrick Bouju is one of the Godfathers of Natural wine and has a cult following, this creates two problems, the wines cost a bomb and it’s practically impossible to get hold of any anyway.

I was in two minds about reviewing this for that very reason, I know home brewers who produce more that guys like Bouju but I’m putting this out because there are so few reviews of his products out there and I want to share what I can with folks.

This wine from Auvergne in South Central France for those who are interested, Patrick Bouju owns around five hectares mainly planted with Gamay d’Auvergne (a smaller, thicker skinned variety from the norm apparently) he also grows some Chardonnay and Pinot Noir. He buys in grapes from other vineyards across the South of France to increase the volume of wine as well as offering different styles.

The grapes in this wine are:

The wine is fermented with indigenous yeasts and is bottled unfiltered and without sulphites and is classed as a Vin de France.

Nose Grass, cherry, nutmeg. Blackcurrant, rose water. Paprika, wet clay or spearmint (I cannot decide which) something earthy later on in the bottle, once you’re half way down.

This has so much happening, it’s a wonderful bottle of Natural Wine, I bought this from Gourmet Hunters in Spain but it’s sold out, best of luck getting a bottle and be prepared to pay around twenty pounds Sterling for it.

Natural Wine can be a mixed bag but when it’s done well then it’s simply perfect. 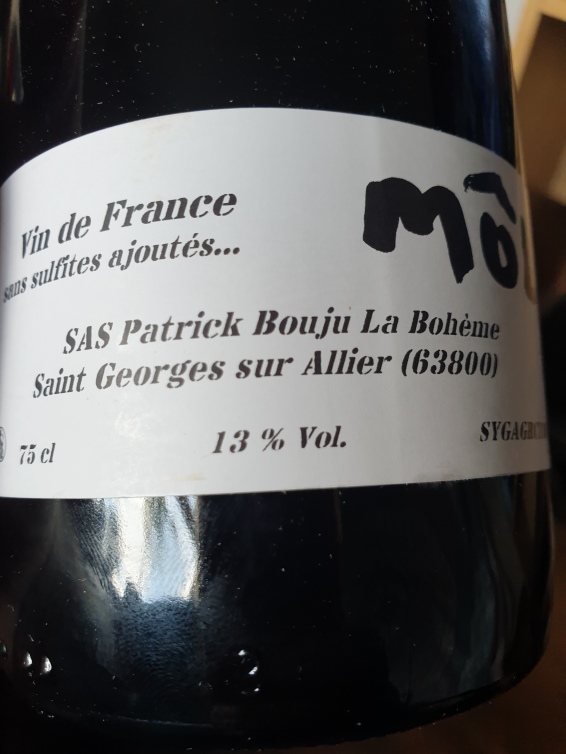