The first home grown whisky from the Weymss Malts family this is a three year old Lowland whisky bottled at 46% and, more importantly, bottled for £45 a bottle.

A lot of people might think, £45 for a three year old whisky, I can get a 15 Year Old Glenfiddich for that, and you’d be right for thinking that, but I will allow that new distilleries cost an absolute fortune to set up and Kingsbarns is no exception, and in the current climate £45 is an absolute bargain.

I have become more and more outraged at seeing three year old whisky being sold for £100 a bottle, and more, it disgusts me, I’ll have no part in it either, some are selling 50cl bottles for that, can you believe it? Anyway, moving on.

Kingbarns distillery is the end game for the Wemyss family (pronounced Weems if you’re interested.) John Haig built his first distillery on Wemyss land and barely produced on the Wemyss estate is used throughout the industry to create spirit but it was in 2005 that William Wemyss started blended and the excellent Wemyss Malts, blended malts, was born.

Wemyss also have a single cask range as an independent bottler and have the Lord Elcho blend too, so a family steeped in whisky, it was only a matter of time before they created a distillery and here we are.

This needs only a drop of water and maybe ten minutes in the glass before approaching.

It would be nonsense to suggest that this is the best thing Kingsbarns will ever produce, it’s youthfulness is obvious, however, so is the quality of the cask, there has been real care taken here to ensure that the finished product is a drinkable and enjoyable product, it is miles away from a young, cheap whisky which has been sitting in some knackered old cask for a few years, this is well worth hunting down and trying out and it’ll be facinating to see what Kingsbarns produces in three, five and ten years time, this is a first release of around ten thousand bottles, they’ve not made much of this but remember many companies would consider this a very limited release.

I just hope they continue with their price policy. 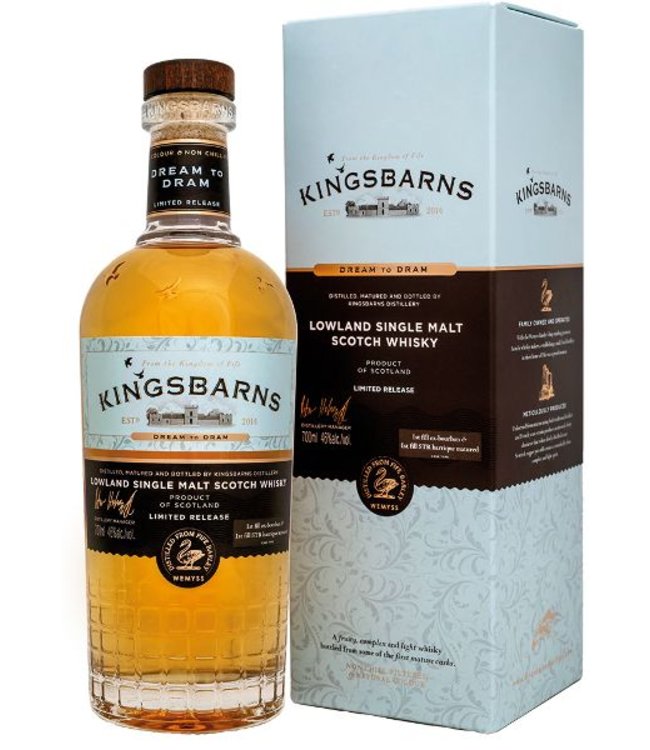