This pack of samples was sent to me from the SMWS and is currently available to buy from the SMWS, link below, for £35.

This sample pack was to run with the 35th Anniversary of the SMWS and a live Facebook event which I couldn’t take part in at short notice.

So, for £35 you get five 3cl samples, seems expensive but let’s take a look and see if you’re getting value for money.

The five samples are as follows;

So that’s the daft names out of the way, how’s the liquid?

I’m not a huge fan of laphroaig, I like a peaty whisky but the medical notes from Laphroaig probably remind me of working in a hospital a little too much, or something.

Very much needs a little water although I understand from Laphroaig fans it’s easy enough neat.

This isn’t my bag, I struggled on for you but I think if you liked Laphroiag you’d be all over this.

Without Pretence, this 22 Year Old Glen Moray from a 1st Bourbon barrel is a weighty 55.7%. The irony of the name isn’t lost on me but I wonder if this will be like the aged Glen Moray I’ve had before from a Bourbon barrel which just ended up tasting like a very nice bourbon.

A drop of water is needed to calm this down otherwise this is a bit fiery.

Nose. The huge vanilla note is a worrying start, then orange honey, wood shavings and some toffee notes.

Palate. Vanilla, toffee popcorn, a little bit of melted salted butter and a touch of clotted cream, some baked apples too, all the bourbon notes are here for sure.

Once again, an aged Glen Moray from a bourbon barrel which ends up just being a bourbon, it’s very nice by the way, and I doubt you’d get a 22 Year Old Bourbon for under £100, which is more or less what this costs, but I think it loses some of the charm I’d expect from Glen Moray.

In the Dark of the Abyss, not a name which you would immediately link with a lovely dram by the fire but here we are with a 60.6% Glentauchers.

Wants water and a lifetime in the glass, at least an hour, but worth the wait.

Best of the bunch and at £56 for a full bottle absolute bargain of a bottle.

For something at 56.6% this really doesn’t need water, if it’s your thing then sure, it’s normally my thing, but this works well on it’s own and water, in my opinion, just softens it up a bit.

Nose. Old hospital wards again but softer than the Laphroaig, salty and coal, like a bonfire on a beach, seashells on the seashore? Maybe. Sweetness though, bitter chocolate covered in petrol sprinkled with some palm sugar.

Palate. Salty, creamy, sweetness, like a vanilla milkshake with some seawater splashed in, mint on the tongue, some barbecued meats and a touch of sweet pipe tobacco, some smoke and then some cough sweets to finish things off.

Finish. Long and lasting, with some lovely smoke and icing sugar.

This is decent, not a midweek sipper, more of a Sunday by the fire type of dram.

And finally, Crones vs Cones, or is it Cones vs Crones, no matter, it’s a 10 Year Old Highlander from Loch Lomond, bottled at 57.1% I prefer this with a touch of water, a teaspoon, no more, and even though it’s young it’s wanting a good 45 minutes in the glass.

Nose. Custard cream biscuits, strawberry icing sugar and rich sugary tea but something which develops over time to bring some aged balsamic and a touch of white pepper.

Finish. Some heat, little touch of sweetness and a sharp too swift finish.

Decent, maybe a bit expensive at just under £60 but a decent example of the expression.

So there we have it, five drams, all very different and an interesting mix.

As a pack it’s okay priced, it gives you a chance to see if the SMWS is worth joining as it shows a broader range of what they offer over the sample pack you receive when joining.

I’ll leave that final choice up to you. 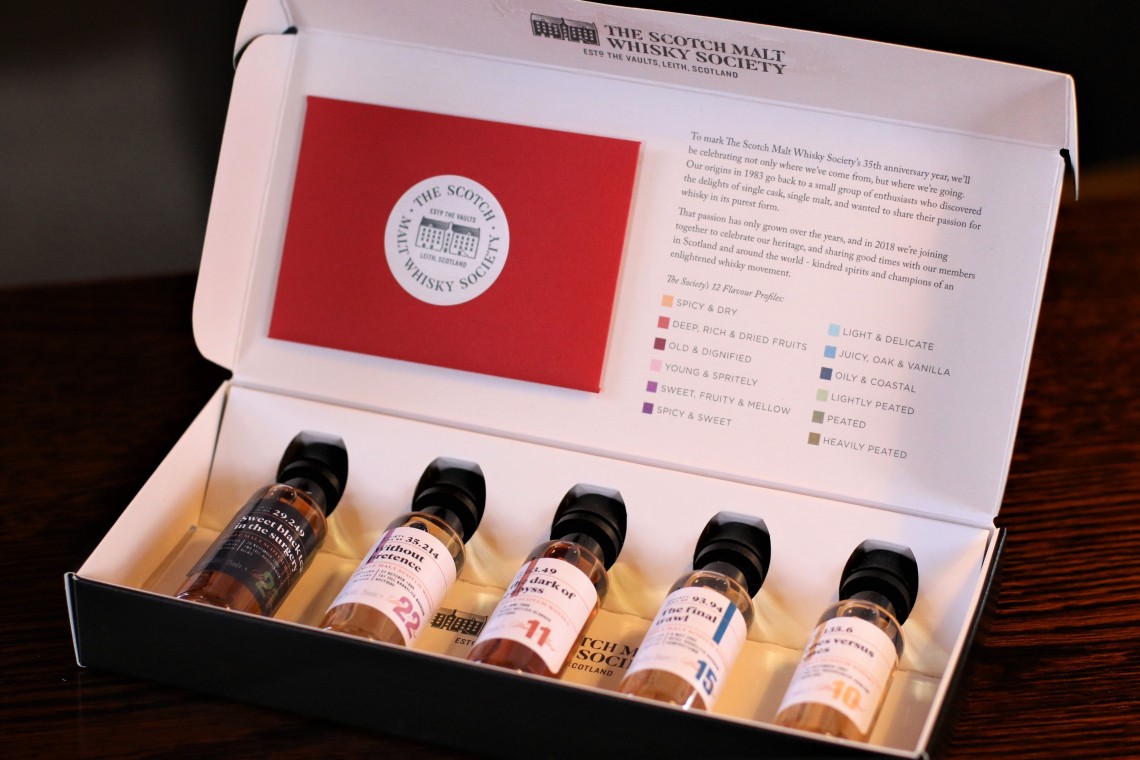