Sometimes a whisky or in this case whiskey is so strange that it should come with a warning label, something along the lines “For experienced drinkers only” and this is one of those whiskies.

I have a bit of a confession to make too, I hope with my hand on my heart that Ironroot stay small forever, not because I don’t wish them success but because I never want them to lose their identity, they are producing some fierce spirit indeed and the smaller the operation the more care goes into the finished product.

Never mind that it’s 53.75% because these days that really isn’t all that powerful no, it’s not that, it’s the complexity and flavour range a whiskey this young, it’s 24 months old, it is a baffling dram.

This is non chill filtered and has been aged in both port and peat casks and is a straight corn whiskey meaning that it’s been stored for two years or more and that it contains a mash bill of at least 80% corn.

I took a touch of water with this, but not much.

Nose. Heavy charring and a lighter peat note, a little aniseed and red wine gums, white pepper, flat Irn Bru, which I appreciate will be rather lost on my American readers and finally, after a good wee while in the glass I get some freshly opened swimming pool, that smell when you’re the first one in the door in the morning.

Finish. The power of the dram stays with you, a sweet candyfloss and orange rind linger until a faint hint of lemon comes along.

Oh aye, this is a very pleasant dram and another indication that America will eventually over take Scotland not just in terms of money making but in terms of quality because I can only imagine how good this will be in five or ten years time. 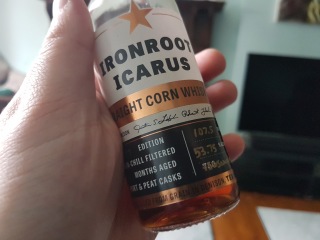