I’ve always been torn on the whole idea of a whisky members club with its members only bars and lapel badges it just screams elitist and whisky snob and I’ve done my very best to not be one of those, although we all fall into that trap sometimes, and I have also tried my best to make most of my reviews whiskies that the average whisky drinker, admittedly one who spends a fair bit on whisky, can afford and can justify and are reasonably available rather than, you know, a confusing members club.

As the old saying goes I wouldn’t want to be a member of a club that would have me and the only criteria that the SMWS seem to have is that their members can afford the membership which starts at £61.50 which gets you access to the memeber’s bars in Edinburgh and London and 10% off food bills, money off SMWS bottles and a few other bits and pieces.

However, I have received as a gift the full booner £122 membership which gets you some wee sample bottles, more on them later, a wee book, a nice wee box and a pin badge plus of course all the other stuff you get with the cheaper option. The memberships last for a year, I also received a free bottle of whisky as the SMWS were doing a pre Christmas deal which is why I received this.

You also get a ten pounds off voucher to spend on any bottle over fifty quid, which is pretty much every bottle.

Now, why am I here? What am I about say? How can I review a membership pack?

Well I have a plan so stick with me, okay? Okay.

My plan is this, I’m going to have a wee look over the membership pack then do a review of an SMWS bottling every month for a year then come back to you if I think it’s worth the bother. One thing I will say is that I can’t comment on how good or bad the current offerings are compared to SMWS bottles of yesteryear because I wasn’t a member before and for various reasons I’ve stayed away from them so this year will purely be about what they sell now.

The SMWS, for those who don’t know, were an indepedent bottling company offering single cask bottles with natural colour and cask strength, it was set up in 1983 by a guy called Pip, which immediately gets my back up possibly unjustifiably, with a plan to buy and bottle casks to give customers the opportunity to buy bottles direct, ish, from the cask and so experiencing the true flavour of whisky, it was owned by the LVMH stable but was sold off and is now controlled by a group of private investors.

It has members bars and Partner Bars which are normal bars which also stock a range of SMWS bottles and you’ll find these all over the world.

I’m not saying that to judge, I’m just saying it.

First I’m going to say that for a company whose aim is to give customers access to a more pure, if that’s the right word, whisky experience I find giving casks numbers and all the bottles daft names a rather bizarre route to follow and one which annoys me, why not just tell us the cask on the label? It’s exactly this sort of nonsense that puts people off.

The Welcome pack itself is lovely, it’s a nice box with a ribbon to seal it and opening it reveals your membership pin badge which is well made and now sits nicely beside my Highland Park Badge on my bag as well as membership card.

There is also a whisky journal booklet full of info about whisky and the society but I think would have been better had it had more pages for personal notes, just a thought, it’s still nicely made though.

You also receive three 10cl sample bottles which all look very nice and I’ll review at a later date and although they give you the age statements of 12, 19 and 21 years the names are whimsical cryptic bollocks that I’ll have no part of.

I’ve decided that when I review a bottle from the SMWS I’ll be naming them 1 through 12 unless I know exactly where they’ve come from and I won’t be digging too hard. 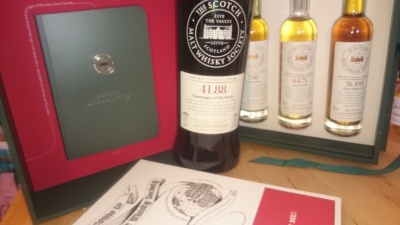 I have sampled both the full bottle and one of the samples which I broke out on New Years Eve and both were excellent but I’ll be looking at them in depth over the coming months.

Oh, I’ve also just found out you get a magazine too, because it’s just dropped through the door.