I like to think of myself of something of a budget whisky champion, I champion many a supermarket whisky as well as those bottom shelf whiskies many people skip by, well that’s not true, in fact the overwhelming majority of whisky drinkers only go for the own brand or below twenty quid bottles of whisky but because I, and many of my fellow whisky bloggers, chat among ourselves I think we perhaps forget who it is who is actually keeping the whisky industry ticking over.

Two things have brought this home to me recently, the first was the revelation that Famous Grouse is now no longer the top selling Whisky in the UK being overtaken by Jack Daniel’s, oh the shame of it all. Now it’s fair to say that Jack Daniel’s hasn’t really overtaken Grouse because those cheeky Americans not only included the Honey version of their spirit but the pre made cans of Jack Daniel’s and coke but then I thought to myself “Famous Grouse is the highest selling whisky in the country?”

But yeah, it’s the top selling whisky in the UK so there you go. I don’t mind Famous Grouse although I prefer the Black Grouse or Naked Grouse and I don’t even think that Famous Grouse is the best blend under twenty quid but others disagree, clearly, but it’s available in various sized bottles, something which I’d like to see more of, it’s available anywhere that sells whisky, is cheap and, and this is important, is one of the few whiskies which we see advertised on the telly and advertising works, which leads me to the other thing I witnessed.

Now you might want to put down your glass of non chill filtered age statement natural coloured whisky and take a seat.

I was in Tesco and I always take a look down the whisky aisle just on the off chance that they have something decent on offer or if I’m really lucky something reduced to clear and I watched a woman take a bottle of Haig Club from the shelves and she said to her man,

“This is the bottle of whisky David Beckham makes”

“Are you sure it’s not just endorsed by him?” says her chap.

And then I walked away before the argument ensued, which it did.

Aye, this woman, and no doubt countless others, thinks that David Beckham, who I quite like by the way, makes this whisky, and because it’s in a really distinctive bottle, which is sneered at by almost every whisky person I know, it then becomes a great gift for anyone who wants to buy something nice for someone who likes both David Beckham and whisky, clever huh?

I don’t even know what I’m really trying to say here, I really just wanted to share the little vignette I thought was both amusing and pretty telling.

Perhaps us whisky drinkers, those of us who love our spirit and don’t want to see it turn into a big marketing tool to make money with, should, instead of sneering, try and explain to people why Haig Club etc might not be the best way to spend nearly fifty quid on a bottle of whisky, I’m certainly going to try and branch out, start following less whisky people on social media and start interacting more with people who maybe want to get something decent but are putting two and two together and getting ripped off.

I think it’s up to us, as whisky fans, to help people with their choices rather than scoff. 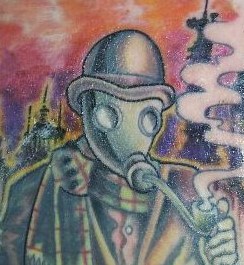