I picked this up at auction and got a pretty good deal, I picked up this and a bottle of Something Special for around thirty five pounds, I’m guessing people might have been a bit put off because with a double or treble lot you will have to pay postage per bottle so a bid higher than mine would have ended up costing another buyer, if they’d had to pay postage you’d be looking at over sixty pounds and as it’s always a bit of a gamble when you’re buying at auction I guess it was a few pounds too far, so lucky me, and I do mean lucky me because this is brilliant.

I am huge fan of blends I think you get far more for your money than you with over hyped Single Malt whiskies and older blends when they’ve held up well in the bottle, due to being well stored, you get some of the finest spirit you’re ever likely to find and I’ve found a very nice bottle here.
Teacher’s Esteem was for the Japanese market, so I’m told, and bottled in the 80s, it carries no age statement but neither does it carry an ABV but as it’s for export I’d say it’s 43% as most Japanese exports I’ve bought over the years have been sold at that slightly higher alcohol level and it’s all the better for it.
This has, in my opinion, a high malt content and the casks used were obviously of a very high standard.
Nose. Very creamy, lots of rich sherried fruit, marzipan, hazelnut and lots and lots of vanilla, I’d guess a combination of sherry and bourbon casks have been used but I’ve been wrong before.
Palate. Again, very creamy on the tongue, lots of vanilla and sherry again, booze soaked raisins and bits of marzipan, I have had a good few glasses of this and sometimes I get a little smoke on the tongue but only a touch and I think it might be more my imagination.
Finish. A reasonably long, rich and vanilla based finish, very pleasant.
Another blend I’m gutted you can’t just pop to Tesco and pick up and it’s such a shame that the whisky business no longer makes such quality blends for a reasonable price, this would have been an attainable whisky for pretty much everyone but I’d suggest to get this sort of quality you’d need to spend a good forty quid, which is a shame, I’m going to say this is better than Famous Grouse Naked Grouse which I loved and which I think you can compare, same sort of feel to them.
I have half a bottle of this left so if anyone fancies a swap then let me know on Twitter.
The Captain. 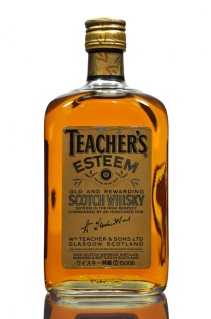