Ya’ll ever seen that show Justified? It’s a cop show, well it’s a US Marshall Service show but let’s not split hairs, and it’s set in Kentucky, everyone in Kentucky drinks bourbon, at least everyone in Justified does, and they drink one of four things. 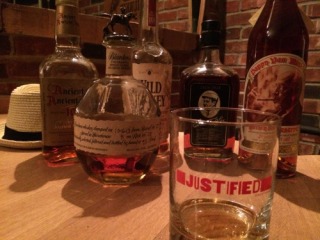 Some of them drink a sort of moonshine thing often “apple pie” flavoured which sounds amazing, some more of them drink Blantons, which I might review at some stage in the future as I’ve had it before and it’s lovely but I don’t have any to hand, one or two of them drink Pappy Van Winkle which I’ll never be reviewing because I’ve only had it once and I was already hefty pished when I ordered it and don’t remember anything about it other than it cost me, about ten years ago, about a hundred quid for four glasses, but all of them drink, at one time or another, Wild Turkey.

Anyway, it’s one of the three reasons why I always, and I mean always, have a bottle of Wild Turkey 81 in my whisky corner, the reasons are that I like it and that it’s often on offer at Tesco sometimes for as little as fifteen pounds a bottle.
So, Justified is cool, and I like Wild Turkey, guess I should tell you why.
Nose. Simple bourbon, clean, vanilla, oak, cinnamon and salted caramel, it’s very easy drinking, I like it either alone or with a single ice cube.
Palate. Sweet vanilla ice cream, toffee popcorn, orange honey and a little touch of coffee.
Finish, short, sharp and sweet, a lingering sweetness, honey, buttery and charred barrel.
A little note too on cocktails, I use it all the time in cocktails because it’s got enough happening that even when mixed it still retains a lot of its depth.
This is a popular whiskey and it’s cheap, if you’re in a supermarket and thinking about picking up your favourite cheap blend why not put it down and pick up this instead? I mean it doesn’t have any dodgy colouring or flavouring either, no bourbon does Go on.

I might, later in the year, try and get hold of some of the other Wild Turkey expressions, watch this space.