I’m writing this in bed and so unwell I can barely see, that said last night apocalypse get together was a resounding success with some new and wonderful drams consumed.

Dominic and myself were a couple of hours early so we decided on a cheeky wee dram to kick off the night, we went for the Aberlour 15 yearold sherry cask and what a bargain at only £2.50 for a wonderful rich creamy whisky, all the right sherry fruity flavours were there in abundance and a great start to the night.

Food and beer covered the next couple of hours until Colin turned up and insisted we put aside our girly drinks and got back on the hard stuff. The Bowmore sherry cask whisky 16 year old was pricey but well worth it, lovely full on hit of sherry on both the nose and pallet and took water really well. 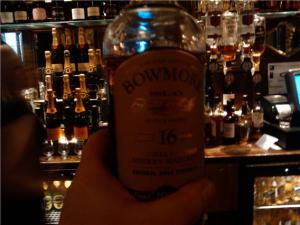 I have to be honest here, after Craig appeared things started to get a bit messy and as I forgot to take mt note book I’m not sure the order the drinks came in to be honest, I do remember a long conversation about magic tricks and feel I may have admitted to much regarding seeing certain light entertainers but I’m hoping no one remembers. 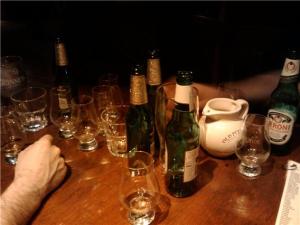 Right the other whiskies we sampled, the AnCoc 12 yearold was the malt of the month in Oran Mor and came with free snifter glasses (well I assume they were free judging by how many I now have in my kitchen) and easy drinker doesn’t do anything wild but not bad as a starter whisky for kids and the ladies. The next choice, I think, came after Craig mentioned he wanted to like Ardbeg but was just too heavy for him, a fair comment so I bought us what I like to call Ardbeg light, the Blasda, a wonderful light tasting peated malt with lovely summer feeling to it, one of my all time favorites and I always like to have a bottle in the house and you should too.

Right it went wrong after that, the Bowmore Darkest, the Laphroaig Cask strength which smelled no different to the standard dram but caused a small explosion when consumed without water, took water really well which was just as well really. 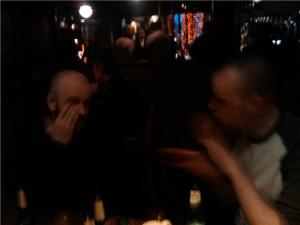 I’m pretty sure we had another but I have no idea what, Dominic performed a vanishing act for a full 20 minutes, beat that Blaine and I’m sure Morrissey turned up but again I might be wrong, I often am.